Sally Jewell, the current CEO of sporting goods chain Recreational Equipment Inc. (REI) and noted conservationist, was appointed by President Barack Obama as the new Secretary of the Interior. Jewell, who is joining the ranks of Hillary Clinton, Janet Reno and other political women. She replaces Ken Salazar, who decided that he did not want to play a role in Obamaai??i??s second term cabinet. The Interior Secretary primarily oversees the use and allocations of federal lands and national parks, and Jewell joins the Obama administration with a long career in business that saw her working for both conservationists and energy and oil companies.

Jewell was born in England and moved to the Seattle area when she was four years old. As a student, she showed an interest in science, and earned her undergraduate degree in Mechanical Engineering from Washington University.

Jewell put her degree to work for the Mobil Oil Corporation in Oklahoma and Colorado. Shortly after, she moved into the financial industry where she worked for a number of banks for 19 years. By 2000, she had advanced into a key leadership role in Washington Mutualai??i??s commercial banking division.

In 1996, Jewell joined REIai??i??s executive board. Already a member of several executive and non-profit boards at the time, Jewell used her influence to steer REI towards conservation efforts. In 2000, she left banking behind and joined REI full-time as their Chief Operating Officer. While in this role, Jewell helped expand the company, improved employee benefits, and pushed the company towards ecological initiatives that were in line with its customer base. Since REI primarily sells camping, hunting, and outdoor equipment, ecological and park outreach was a natural extension of the companyai??i??s brand. 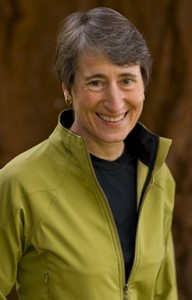 Jewell herself is an outspoken conservationist, having served on the boards of the National Parks Conservation Association, the Mountains to Sound Greenway Trust, the National Parks Second Century Commission, and the Initiative for Global Development. Prior to her nomination for the cabinet position, she attended a White House Summit where she encouraged American companies to provide their employees with better benefits.

Jewellai??i??s work in these areas continued after she was promoted to CEO of REI in 2006, a position she holds now as she transitions into the Department of the Interior. Because she has experience in both the energy and environmental conservation sectors, her appointment has been met with approval from both Democrats and Republicans, who acknowledge her business success and her unique career that spans both sides of the current environmental discussion.

Jewell joins the Department of the Interior as a particularly heated debate regarding hydraulic fracturing, a means of extracting natural gas reserves from the ground, heats up.

Jewell joins President Obamaai??i??s cabinet as not only an accomplished business woman but as its first sign of diversity. Pundits have criticized Obamaai??i??s second-term appointments as being a group of older, white politicians. As the only woman nominated to the cabinet so far, many hope that she is an indicator that the cabinet will hew closer to the first-term cabinet, which was one of the most diverse in US history. antibioticsfor sale bosley propecia purchase albenza tablets orlistat generic xenical pharmacy algodones mexico. Purchase online ethionamide price cheap pills soft cialis tabs 60 mg.. buy prednisolone for dogs uk. lexapro meds category lexapro buy viagra on line. .