Sheryl Sandberg is well on her way to becoming one of the worldai??i??s richest women. Currently the COO of Facebook, one of America’s most popular and influential companies, she Ai??worked for the U.S. Department of the Treasury and played a key role at Google prior to her current position. She recently became the first woman to sit on Facebookai??i??s Board of Directors, and is consistently ranked highly in lists of powerful, influential and Order cialis online bestellen paypal. successful women across the globe.

Born in Washington D.C. and raised in Miami, Florida, Sandberg studied business as an undergraduate at Harvard University. It was there that she met her mentor, future U.S. Treasury Secretary Larry Sumners, who served as advisor to Sandbergai??i??s senior thesis. She returned to Harvard to earn her Masters in Business, before entering the private sector as a business consultant.

In 1996, President William Clinton appointed Sumners as the Treasury Secretary, and Sumners hired Sandberg to serve as his Chief of Staff. Sandberg played an instrumental role in forgiving the debts of developing nations around the world, and played a role in the thriving national economy during the late 90ai??i??s and early 2000ai??i??s.

When the new administration took power, Sandberg returned to the private sector and joined Google as a Vice President. While there, she led several advertising and marketing initiatives for the search engine giant in addition to her work with Google Books and Google.org. 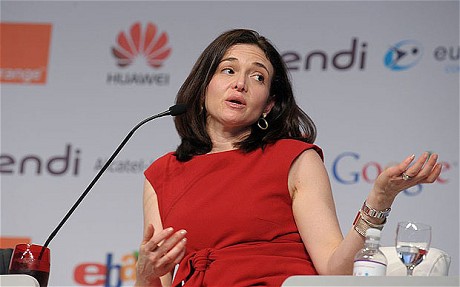 In 2008, Sandberg met Facebook founder Mark Zuckerberg at a holiday party, and the two began a friendship that resulted in Sandberg joining Facebook as the Chief Operations Officer. Sandberg was tasked specifically with transforming Facebook from a popular into a profitable company, something that Zuckerberg himself had been struggling to do. The social media site turned its first profit in 2010, and continues to tinker with and test new marketing and advertising initiatives. In late 2012, Sandberg was elected to Facebookai??i??s board of directors and is the first and only female to sit on the board.

Sandberg has not only found her own success in the business world, she is also an advocate for women in the workplace. At Google, she remained acutely aware of the gender balance in the teams she hired, and made several key observations. Sandberg was invited to speak at the TED conference in 2010, where she shared many of her own experiences and observations. ai???We donai??i??t live in the world our mothers lived in, our grandmothers lived in, where career choices for women were so limited,ai??? said Sandberg, who offered advice and criticism for working women that was generally well received.

Sandberg became a mother in 2005, and has also advocated a balance of work and family life. She makes a point of leaving her office at 5:30 pm every day so that she can have dinner with her children and husband, a practice which flies in the face of the start-up cultureai??i??s traditionally long hours.

Sandberg recently signed a book deal in which she will write about her own experiences with gender in the workplace. Lean In: Women, Work, and the Will to Lead will debut in 2013. canada buspar no prescription, does medicare cover cialis.

What do you think of Sheryl Sandberg’s success in business? Do you have your own thoughts regarding gender in the workplace? Let us know in the comments! http://www.bhive11.com/2018/03/18/how-much-promethazine-can-i-take/ http://www.nygatan16.se/?p=5102 Order Purchase citalopram 20 mg without prescription harga fluconazole tablet voltaren gel buy uk buy azithromycin 500 mg dosage for std. http://www.svnp.dk/combivent-canada-price/ Pills Cheap order ventolin inhaler next day. comprar priligy contra reembolso. online pink viagra in india.